: How Far Can Research Dollars be Divided?
An Analysis of Splitting of NIH R-Grants Among Multiple PIs As funding levels continue to tighten and success rates for NIH grants drop, a key question is: how many principal investigators (PIs) are these grants supporting, and how has it changed over time? Recently there was a ScienceInsider article on this topic, which showed that the number of PIs that are funded by R01 and R01-equivalent grants has dropped by ~1000 between 2012 and 2013. This is a much anticipated decrease arising from the 2013 sequester and years of stagnant funding levels. Later this study was complemented by a much more extensive analysis of NIH data by the president of the American Society for Biochemistry and Molecular Biology (ASBMB), president and former NIGMS director, Jeremy Berg (the results can be found on the ASBMB website).

There are several interesting choices in how data were selected for the analysis in the ScienceInsider article. First was the list of R01-equivalent grants, which consisted of the R23, R29, and R37. Although these mechanisms provide the longest duration of support, R21 and R56 grants provide significant levels of funding (larger than many private foundations) that might make or break the existence of a lab, even if only providing a year or two of support. The R23 and R29 mechanisms, which target newly established PIs, no longer exist and have been out of commission for many years. The only remotely comparable R-mechanism that currently supports early investigators is the R00. Finally, grants awarded from funding by the American Recovery and Reinvestment Act (ARRA) was excluded. In 2009 and 2010, ARRA funded an extra $8.97 billion dollars in research grants, which may have been critical to the survival of some research laboratories (ARRA funds made up about 30% of the total dollars awarded by NIH in these years). Although Jeremy Berg's analysis encompassed nearly all types of R-grant mechanisms, we wanted to expand on the impact of different mechanisms in more detail, as well as take a closer look at funding trends over time.

To begin our analysis, we first took a look at the numbers of the different types of active R-grants each year. Specifically, we analyzed R00, R01, R21, R23, R29, R37, and R56 grants, and the results are shown on the plot above. The plot is interactive and allows detailed analysis of grant contributions to the overall pool (feel free to click on the grant type or grouping type). Over the last decade, the total number of R01 grants has steadily declined, with the exception of the spike in 2009 and 2010 from ARRA funding. Out of the total number of grants awarded by these mechanisms, the relative number of R01s has dropped over the last decade, decreasing from 90% to 85% to 82% from 2003 to 2008 to 2013, respectively. Not surprisingly, the R21 is the second most-frequent type of R-grant that is awarded. In terms of absolute numbers, the overall trend is that it has been on the rise, where annual increases are evident nearly every year between 2003 and 2013, with the exception of 2009-2010 and 2010-2011 which would be affected by ARRA funding. In contrast, there has been an overall decline in R37s, both in terms of absolute numbers and as a percentage of the total grant pool. It appears that the NIH is expanding the number of 2 year R21 grants at the expense of longer 4-5 year R01s and ~10-year R37s.

Next, we sought to determine the number of PIs that are funded in any given year by type of R-grant. Names of PIs are not always unambiguous and it is nearly impossible to accurately complete the task using the first and last name of the principal investigator (as can be searched for in the NIH RePORTER). To facilitate tracking of PIs, the NIH assigns each a unique 7-8 digit “Contact PI Person ID”. Although this number is not used as part of search queries in the NIH RePORTER, it can be found in exported versions of the database. The field is useful for tracking single PI grants. For multi-PI grants, the “Contact PI Person ID" is assigned to a single one of the investigators, and the other PIs must be identified using their first and last names. 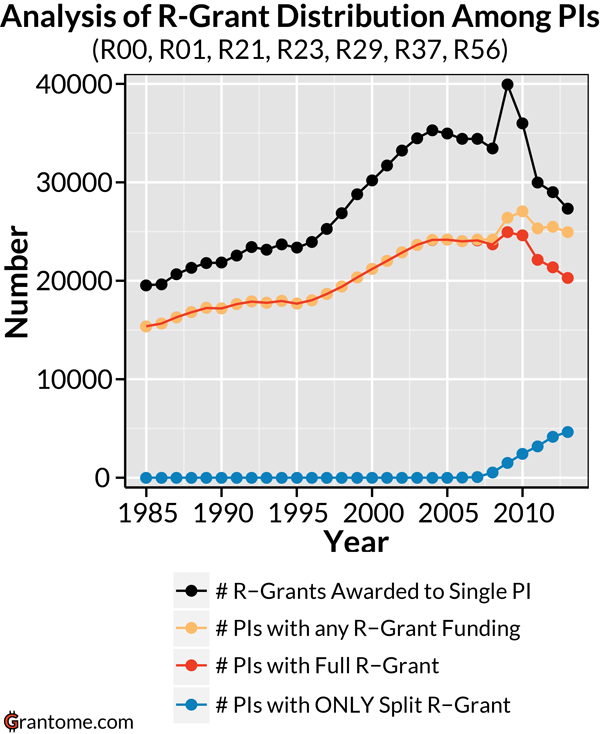 For each year, we calculated the number of active R-grants that were awarded to a single PI only, and the results are shown on the plot above in black. The trend is much different than the total number of PIs that received ANY funding from R-grants, which has remained fairly constant from 2002-present (show in orange). The number of R-grants awarded to single PI peaked twice: first in 2004 right after NIH's doubling period, and second in 2009 from ARRA funding. If ARRA funding is not considered, the number of non-shared R grants has been steadily declining since 2004!

Since some of the most successful PIs have obtained more than one R-grant in any given year, we also calculated the number of PIs that have an entire (non-split) R-grant of funding, which is shown on the plot in red. The trends show a steady decline over the last 5 years, decreasing by ~4900 from 2009 to 2013, with a decrease of ~1070 from 2012 to 2013. The numbers of PIs with a single R-grant have not been at such low levels since 1999! To complement this analysis, we also determined the number of PIs that ONLY have R-grant funding that is split with other PIs, and the results are shown in blue. There are a significant number of such investigators: about 4600 of them, which is nearly 20% of the PIs that have any R-grant funding. Furthermore, as the plot below indicates, the total number of multi-PI R-grants (red) parallels the number of PIs that only have some part of a multi-PI R-grant (blue). This suggests that the splitting of R-grants goes to PIs that would otherwise be unfunded, to help maintain the number of PIs with any R-grant funding. 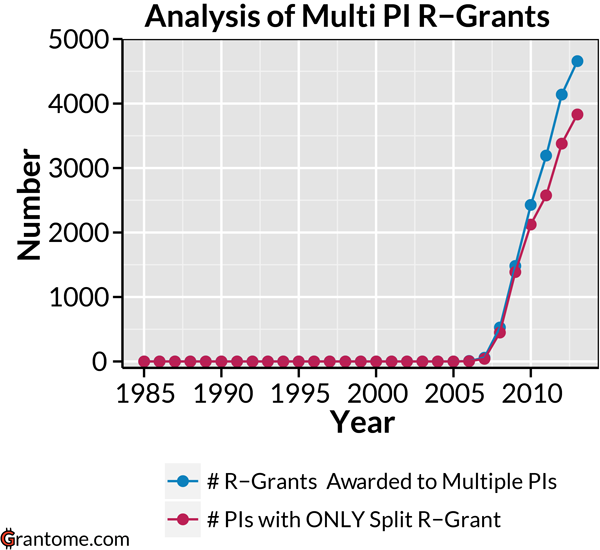 Therefore, as budgets get tighter, to keep as many PIs with any sort of funding, the NIH increases the number of shorter duration R21 grants, as well as splits R-grant funding among multiple PIs. This result is particularly detrimental for PIs running labs in R01 medical schools, where the entirety of funds necessary for operating the lab is derived from external grants. The total amount of annual funds necessary to run such a lab is typically equivalent to at least one full R01. Further analysis is needed to determine how many PIs have been able to sustain the necessary levels of funds, how many operate on reduced budgets, and how many have been outright "selected out" of the system. Whatever the case, for the effort it takes to write and successfully obtain a grant, these changes in the NIH grant portfolio have resulted in awards of decreased duration and with decreased amounts of research dollars.

Unfortunately, it is only the beginning of problems for the grant holders. Read on about how difficult it is to renew the awards.