: In it to win it
Pathway to scientific independence by the NIH K99 award 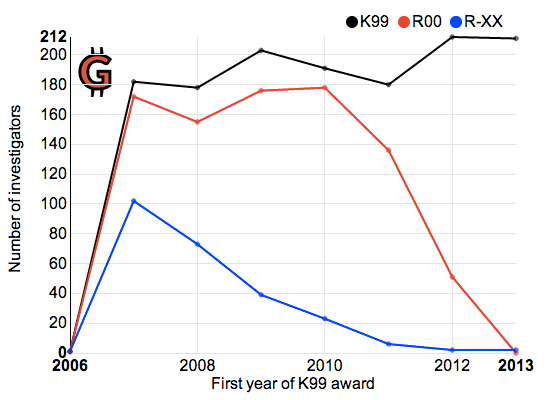 The postdoctoral training period is nearly essential for all research scientists who aspire to lead a research laboratory in a university or non-profit research center. To characterize the transition of scientists from postdoc to established PI, we previously conducted an analysis of how many postdocs with a NIH-sponsored F32 fellowship went on to become PIs of a R-esearch grant.

In 2006, NIH introduced the Pathway to Independence Award (Parent K99/R00) to "facilitate a timely transition from a mentored postdoctoral research position to a stable independent research position". Each year ~ 200 postdocs win this fellowship, which provides up to five years of support divided among two distinct phases of their careers. The mentored phase (called K99) provides support for up to 2 years of additional postdoctoral training in their mentor's laboratory. During this time, the postdoc applies for faculty positions and upon receiving one, obtains up to 3 years of additional funding (called R00).

For each year we quantitated the number of new, active K99 awards, which reflects the number of postdocs in their first year of K99 funding as shown on the plot above (black line). The success of these awardees at obtaining an independent faculty position is reflected by the number of K99 awards that transition into the R00 phase (orange line). To facilitate this comparison, the "year" for the number of investigators with R00 grants corresponds to that in which the K99 phase was initiated.

Out of ~200 K99 awardees initiated each year between 2007 and 2010, close to 90% managed to transition to an independent position. Such stunning success rate is only possible if the program both selects outstanding postdoctoral researchers as well as provides incentives for the university hiring committees to employ such scientists. K99 awardees do have a financial advantage over any other applicant, because R00 funds may defray some of the associated costs of starting up the laboratory, thus allowing the university to provide less money. Moreover, universities may also benefit from the indirect costs associated with the R00 for up to three years.

We next calculated the number of K99 awardees that become PI of a NIH-sponsored R-esearch grant by the end of 2013 (blue line). To facilitate comparison to the K99 and R00, the x-axis reflects the year in which the K99 award was activated. Strikingly, close to 60% of 2007 K99 awardees became the PI of a R-esearch grant by the end of 2013. These statistics are in contrast to the success of F32-supported scientists at obtaining these same R-esearch grants, which are at most 25% for awards initiated between 1990 and 2000 and less than 20% for awards initiated after 2002. It also contrasts with the single-digit success rates of these same R-esearch grant mechanisms across all investigators. Finally, the success of K99 winners is also surprising given that it is well known that new investigators have a lower success rate than established investigators.

In the uncertain climate of federal funding, this begs the question: how can K99 awardees be so successful at securing a faculty position, followed by a high chance of obtaining a R-esearch grant? Perhaps the answer to this question is reflected in the design of the award. By gearing it towards late stage postdocs, the NIH can select scientists that demonstrate success during the first years of their postdoctoral training period. The K99 application also requires a detailed plan for the research project to be launched during the scientist's independent career. The award also provides funds that can be used to support collection of relevant preliminary data necessary for both landing the faculty position and subsequently writing R-esearch grant applications. Finally, these funds provide incentive for the institutions to hire K99 awardees preferentially over other qualified candidates.

To ensure that the trainees are in it to win it, it is clear that they should strive to bridge their pathway to independence via the K99/R00 award. The only obstacle to this bridge is ~20% success rate that makes them one of the 200 lucky winners.