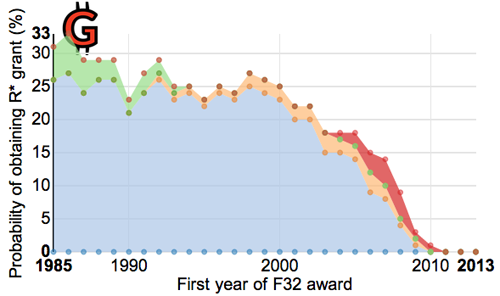 A dream of every research scientist is to run their own independent laboratory, where they will be able to explore their ideas, educate future scientists and contribute to the university's service. The Ruth L. Kirschstein National Research Service Award (NRSA) (Parent F32) provides the financial support for the training of postdocs who "have the potential to develop into independent investigators in scientific health-related research fields". It is a NIH-sponsored program designed to select and train the best future scientists.

In the last decade, somewhere between 500 - 700 individuals were supported by F32 postdoctoral fellowships every year. Each trainee would receive up to 3 years of support to "provide stipends as a subsistence allowance to help defray living expenses during the research and clinical training experiences". To obtain such award, a newly minted PhD student would write a proposal that outlines the goals and objectives of their postdoctoral research and scientific training. Ideally, the postdoc would obtain this highly competitive award by the end of their second year. The acceptance rates are only 20-30%, and therefore only the best and the brightest postdoctoral fellows have the chance to continue their scientific training with the support of this prestigious, government-sponsored program.

Here, we wanted to see how many F32-supported postdoctoral fellows transition to run independent research laboratories that are successfully funded by one of the NIH R-grant mechanisms. As before, we chose focus on R00, R01, R21, R23, R29, R37 and R56 grants. For our analysis, we extracted from the database the names of F32 awardees. Then we determined if these same people subsequently became PIs of an R* grant. Our analysis does not include identification of scientists who become equally successful independent investigators in other contexts, such as those that obtain PI status on a NSF grant or participate in NIH intramural research programs.

Above, we plotted the "highest quality award" that F32 awardee managed to obtain within fifteen years from starting their fellowship. Grants were ranked in decreasing order of "quality" - R37, R01, R56, R21, R23, R29, R00 - in accord to the monetary value of the grant as it somewhat reflects the health and success of the laboratory. We found that the dream of postdocs transitioning to run a NIH-funded research laboratory has grown substantially slimmer with each passing year. For F32 recipients whose award initiated during the 1980s, the probability of obtaining some type of R-grant was over 30%. For those who started their training during the 1990s, particularly those who started towards the end of the decade, this number drops to the mid-20s. Finally, postdoctoral fellows who started after 2002 have less than a 20% chance of becoming the PI of an R* grant by the end of 2013.

But the change in "quality" of the award over time obtained by each PI is even more worrying. Over 20% of F32 awardees trained during the 1980s and 1990s managed to obtain R01 grants - the most common and respected mechanism of financial support in the medical research world. But for trainees who started in early 2000, the probability of obtaining an R01 grant is less than 20%. For awardees who started their F32 fellowship in 2006, there was less than a 10% chance of obtaining a R01 grant by the end of 2013! To make the laboratory launch even more challenging, over 10% of R01 and 30% of R21 awards were split between multiple PIs in recent years. But these statistics should not be shocking, since the median age of first time R01-awardees is over 40 years old and has steadily increased over the last two decades. Assuming no gaps in the training period of a scientist, the average R01 recipient would have a eight year PhD, eight year postdoc, and five years of independence prior to obtaining a R01.

Therefore, it is perhaps not surprising that the "potential" of 2006 F32 recipients, who started their "postdoctoral training" around 2004, may not yet be realized.

Although most scientists in Ph.D. and postdoctoral training aspire to become tenure track independent PIs, the fraction of people who succeed in doing so are actually the vast minority. Despite ever decreasing job prospects in the academia, PhD and postdoctoral programs are not decreasing student enrollment.

Should the emphasis of F32 postdoctoral awards be changed to focus on jobs for which over 80-90% of trainees have some realistic expectation of obtaining?