: San Francisco wins
Changes in the number of R01s in Massachusetts and California

In the previous set of posts, we analyzed the relative success of institutions at obtaining R01 research grants and the impact of geographic distribution. In particular we calculated the net change in the fraction of total R01 grants between 2000 and 2013. Even though many people believe that the Boston area is the future of scientific research, we concluded that California is the place to watch for the next decade.

In this subsequent analysis, we decided to compare and contrast the best of the two coastal states - Massachusetts vs. California, East vs. West, in greater detail. New England's Massachusetts is a relatively small state, with less than 7 M people, and is sufficiently small in land area that it takes no more than two hours to drive across the entire state. Despite its small size, it has been a research hub since the foundation of Harvard University in Boston's suburbs. With MIT, Northeastern University, Boston University and Tufts in its vicinity (as well as over 100 others), Boston has created one of the most famous and productive centers of scientific research in the world. In comparison, California has almost 40 M people and has the land area to fit Massachusetts more than 15 times over. Just like its East Coast counterpart, California has famous universities - Stanford, UCSF, UCLA, and UCSD. Over its large land area, three major research hubs have developed in the vicinities of San Francisco, Los Angeles and San Diego. Depending on your opinion of "proximity", Los Angeles and San Diego might be regarded as a part of a single hub, since the distance between them - ~125 miles - is similar to length of the state of Massachusetts.

In the San Francisco area, UCSF, UC Berkeley, and Stanford have all increased their relative numbers of the R01 grant pool by 0.27, 0.06, and 0.08%. The same is true for nearby UC Davis and UC Santa Barbara, which increased by 0.38 and 0.08%, respectively. Looking at the changes that are largest in magnitude, the vast majority of them are positive. The net result is that the general San Francisco area has become an expert at milking NIH - over the last decade it increased its fraction of the available R01 grant pool by 0.92%.

In contrast, the universities in the Boston area are all losing their share, with negative numbers ranging from -0.04 to -0.18 for Harvard, Boston University, MIT, and Tufts. Intriguingly, the behavior of the universities is opposite to the 3 major Boston area research hospitals - Brigham and Women's Hospital, Massachusetts General Hospital, and Children's Hospital Boston - that have strongly increased their fractions by 0.14%, 0.36%, and 0.27%, respectively. Of the 20 institutions reported in the table, 13 are negative, while only 7 are positive. Nevertheless, the net sum over all universities and hospitals in the Boston area is positive, at 0.22% - much less than the San Francisco area.

The movie star lifestyle in the LA area has attracted scientists too, since its associated institutions have increased their collective share of the grant pool by 0.42%. Of the 13 dominant R01-reciving institutions in LA, 12 have increased their fraction, with only 1 decreasing! San Diego, despite being much smaller than any of the mentioned hubs, has overall gained 0.32%. Remarkably, Scripts Research Institute has singlehandedly brought down this number by a whole 0.3%! 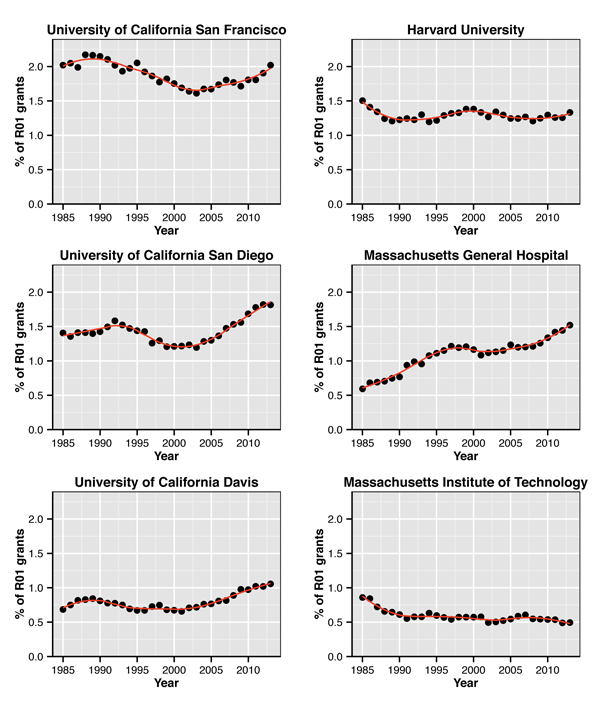 So when did California, with its nicer weather and laid-back beach culture, start attracting the best & brightest minds? Looking at the plots of the top institutions in both states, shown above, it is clear that the "change" occurred a decade ago, around the time when NIH stopped expanding. Since then, institutions on the both sides of the coasts were increasing their share of NIH funds and cannibalizing the center of the country. But somehow, California - particularly its universities - seem to be doing a better job gaining their yearly share of the pie (sort the table by increasing value and you will find that the top X institutions are in California). This almost 2% increase in the share of R01 pie over the last 13 years corresponds to obtaining over $300 million from NIH (assuming that other grant types follow similar pattern).

Would you say that Massachusetts is resting on its laurels?