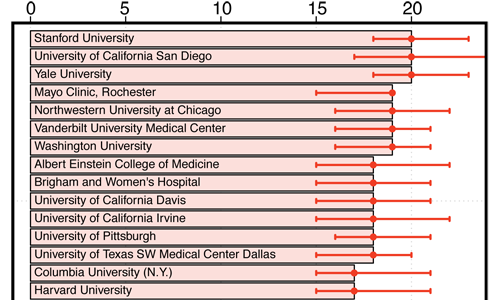 Previously, we calculated the fraction of the R01 grant pool that each institution has obtained in 2013, and how this fraction has changed over time. We now wanted to perform a complementary analysis, determining institutional variability in the length of time that individual PIs are able to maintain NIH grant funding. This analysis would be of interest to university administrators who want to receive maximum grant revenue from each PI they invest in to start a lab. It is also of interest to PIs who want to have an active research career for as long as possible.

Here, we used survival analysis to characterize the top 50 institutions based on the ability of its faculty to maintain NIH awards. Such an approach is often applied to evaluate the affect of new drugs on the life expectancy of cancer patients or the time until failure of mechanical systems. We used survival analysis to measure the total time range (in years) over which each PI had substantial NIH grant funding, considering only PIs that had obtained a R01 grant at some point in their history. For any particular PI, we started counting the years when they received either a R* grant or >$100,000 from a P*grant. PIs were considered “out” of the system only after they lost all funding for over two years.

First, for any PIs that had NIH funding, the median time range was 13 years (the corresponding survival function is plotted in blue). This is similar to the median for PIs at Boston University (black), where the median was 12 years. In contrast, at Stanford University (cardinal red) over 65% of PIs maintained funding over this same time period. In this case, the median time range was increased to 20 years! This affords Stanford faculty not only the opportunity to train more graduate students and postdoctoral fellows than their Boston University rivals, but also each PI generates more revenue for the University.

Assuming that PIs obtain their first NIH grants around the age of 40, at Stanford the majority of PIs will continue to run their laboratories until 60. In contrast, PIs at Boston University have a much higher chance that their research careers will last not much longer than a decade.

Not all environments are created equal – the odds of success of any PI is tied in some way to his/her research environment. As we improve and refine our analysis, can you tell us what resources and factors you find most useful for achieving sustainable NIH funding?