: Research Dollars are Decreasing for the Most Funded "Keywords"?
Trends in R01 Funding of Various Cancer-Related Cellular Signaling Pathways 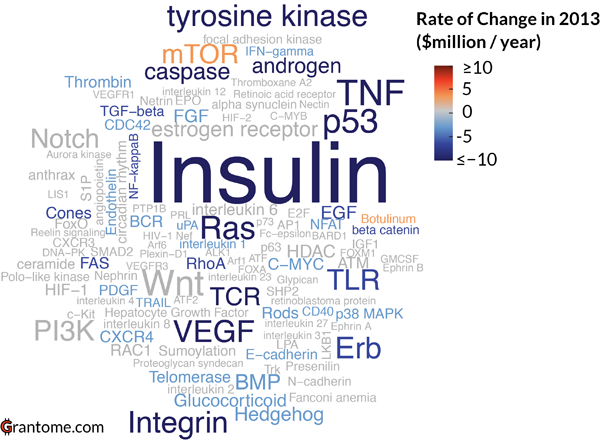 The hot, most fundable research areas come and go over time, as with many fads. For example, research dollars that are devoted to develop a particular technology or method will grow rapidly after it is initially discovered, eventually stagnate as its potential is realized, and decline as it is replaced by better technologies. Staying on top of the latest research trends is critical for securing research grant funding. The funding process is typically an arduous, multi-year process after the initial conception of the idea, requiring collection or preliminary data as well as crafting many research proposals, which are submitted over and over until it becomes funded. Given the time, energy, and resources that go into each research grant, identifying "fundable" research areas is absolutely critical.

The Grantome search was created with the end needs of the user in mind, where the results of any search can be tabulated and summarized across any number (thousands to millions) of search results. For example, after the search of any particular keyword, the total number of research dollars can be summed for each year, and the results are displayed as a graph using our visualization tool. Thus, trends can be identified for some the most important variables for searches with large numbers of results within fractions of second of conducting any search.

Specifically, we analyzed funding trends for the particular example of cellular signaling pathways of demonstrated relevance in cancer. We identified 120 keywords on the basis of the NCI - Nature Pathway Interaction Database and wanted to explore the total number of research dollars in R01 grants that were devoted to funding topics related to each keyword. To be able to analyze changes in funding patterns over time for each keyword, the total number of dollars in R01 research grants was tabulated for every year between 2000 and 2013.

Huge variability is evident in the trends associated with funding of different keywords. Funding of mTOR (mammalian target of rapamycin, a kinase complex that acts to regulate cell growth) has been steadily increasing over time, increasing almost 40-fold from $2 million in 2000 to $77 million in 2013. This is in contrast to other topics that are past peak, for example funding of the NF-kappaB signaling pathway peaked in 2005 at nearly $121 million. Before and after 2005, funding levels were steadily increasing and decreasing, respectively, and the lowest levels of funding were reported for 2013 at $33 million. The funding levels of research related to NF-kappaB have dropped 4-fold since their peak. Other pathways receiving significant levels of funding are stagnating or in early stages of decline. For example, funding of the Notch pathway has stagnated, with the 2013 level of $78 million similar to the value of $83 million that was reported in 2010. Similarly, in 2013 $44 million of R01 grant funding were devoted to studies related to the Hedgehog pathway, and these levels are 20% lower than what they were in 2010. Finally, funding levels of some keywords have remained essentially constant over time, for example for interleukin-8.

Nearly all of the keywords are "blue", suggesting that the majority of these keywords are declining in fundability with each year. This is interesting considering that many of these topics receive considerable absolute amounts of research dollars, as much as $365 million in 2013 for insulin. At least in the case of these cellular signaling pathways, areas that receive large numbers of research dollars are not areas in which a new related line of investigation is likely to receive future funding. Researchers in these areas will have to fight for declining numbers of research dollars every year, and new researchers that might start studies in these areas will have to compete against already established ones for declining pools of money. The reason for the general decline in the funding levels of these keywords is unclear and may relate to decreased priorities by the NIH for funding basic research on the level of the cell. Further analysis of the database reveals that this general decline does not arise from focusing on grants of the R01 type (not shown).

The results of the analysis are reported on the above word cloud. Indeed, many keywords such as Arf1, Aurora kinase, LKB1, and nephrin received low amounts of R01 funding in 2013, as reflected by the small size of the corresponding words. Yet all of them are colored "red", indicating that current funding levels are higher than any other year since 2000. This would be consistent with funding trends that are either increasing or constant. It turns out for the 4 keywords listed above, funding is rapidly expanding and has consistently grown over the last several years. Perhaps these topics, while not the emphasis of presently funded grants, would make good topics for future grant applications?

How do you think potential future areas of research should be identified?